By Editorial TeamApril 24, 2016
“After climbing a great hill, one only finds that there are many more hills to climb.” – Nelson Mandela

English is my first language but often that doesn’t make communication any easier. The Webster dictionary defines “Idiomatic Expression” as a type of informal English that has a meaning different from the meaning of the words in the expression. A good example would be the expression: “It’s all downhill from here”. Every long distance runner knows that this phrase doesn’t necessarily mean the hill is sloping downward; finding the TRUE meaning is a little more nuanced. Should you hear someone say this phase, they could be trying to tell you a few different things. Best to ask for clarity. From my extensive linguistic research, here are a few common definitions:

The Most Beautiful Trail (*cough cough* road ) Race In the World

Big Sur, California is the reason people drive the length of California. It’s the reason people dream about heading West. US Route 1 hugs the bosom of the Pacific Ocean, it’s rocky, gorgeous shores and clear blue waters reaching into your mind and massaging away the toil and trouble of every day life. And if you’re in a car, the gently sweeping hills, corners and vistas make the California traffic not just bearable but pleasurable; any excuse to stop is an excuse well worth making. In 1986, someone had the bright idea to shut down the road for a Sunday in April and put on a Marathon. Beautiful the long, winding road may be, but on foot it’s something else entirely.
The race runs like a trail race. Here are some of the similarities:

Knowing the course is 75% of getting the pacing right. Knowing what to expect really puts your mind at ease on when to pull back on the effort and where you can make up time (like crushing a downhill). Now a normal person would have looked in detail at a course profile before starting the race. But I am not normal. I am an idiot. And like an idiot, who thinks they’re being smart, in reality they are shook with the realization of their idiocy only at the point where it’s too late to do anything about it.
My wife started making pace bands a few years back – they are an easy way to keep track of key points in the course. Strap it to your wrist and hold on tight. Unfortunately, there was a little bit of a difference between the posted elevation chart on the Big Sur web site and the REAL elevation changes on the course. See if you can spot the differences: 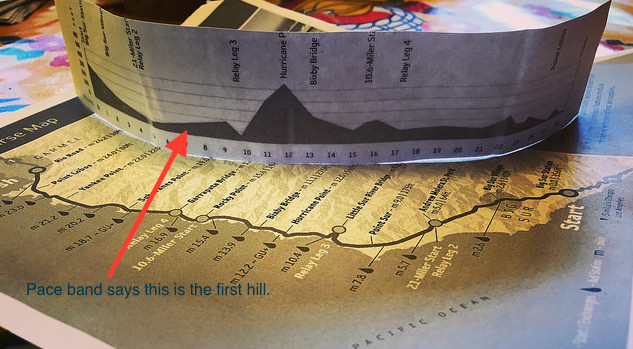 Training for a Spring race is always a challenge in New England. The long, cold winters were relentless this year. Still, the training was really race-specific for me with a few key tweaks:

There’s no “best” way to run a long race – however, there are some general guidelines. Starting at a modest effort and keeping an even pace until about 21-22 miles sets you up to finish strong. Starting too fast, and you risk switching to accelerated sugar burning way too early – this has the effect of accelerating the glycogen burn way before you really need to – and crash goes the race-car. So, let’s say you start your marathon by running really fast – like way too fast to be sustained for 26 miles – well, that can’t end well. Or at least, it’s a little bit crazy.

So, that’s what I did. As requested by the “We Be Crazies” relay team, I joined one of the several marathon relay teams taking part in the race. The way this works is as follows: you have 4 people in each relay team. Each person in the relay team runs about 1/4 of the race and passes the baton to the next team-member. If you’re in the first leg, you can then 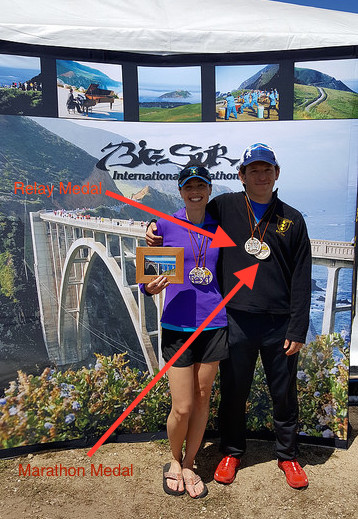 continue to run the entire race if you so choose. So instead of running an even 9:05 the whole way, I would run the first five miles as fast as possible and then the remaining 21.2 miles hanging on for dear life. This is NOT the way to run a strong race. It IS a way to have a good time. The team kicks much ass.
I did, however, get two medals for my trouble. And the wife’s team got 2nd place – podium finish is always amazing (or so I hear). Team-work makes the dream work.

This is an amazing race – run it. I said run it! That said, it’s brutal. Although I felt not too awful after the race (quads totally fine – what’s up!), I’m pretty sure that I haven’t felt that wrecked in the days that followed in a long time. Can’t wait to run this one again when the weather is a bit more cooperative. Now that I know what to expect, I’m sure it’ll all be downhill from here.