Every year since I started running, I’ve tried to line myself up for a spring and a fall race. With two small kids and a raging pandemic  that has proved impossible and likely, quite dangerous. Back in January, when the world was not quite off the rocker I had the idea of running the NYC marathon for charity. Not only does it fall on my birthday this year (2020) but I was defin

itely curious if I’d be able to recover from life with 2 kids to a shadow of my former self. Mostly, it’s a great birthday present to yourself – all an introvert wants for their birthday is just time to be left alone. Strange, but true.

Would it still be possible to run something long in the fall? Turns out – all you really need is motivation and stupidity. I have plenty of both so decided to convert my NYC running ambitions into a solo ultra-marathon effort, attempting to run 44 kilometers for my 44th birthday! Not exactly an amazing distance but it still qualifies as an ultra-marathon and worst comes to worst I can always head home early for cake. Because, you know – CAKE.

The plan would be to keep the course as SIMPLE as possible. I wanted to be able to accurately account for the mileage, ensure that my wife (who gallantly covered both kids) would know where I am and my estimated time to return back home. Equally, I did not want to add hills to the effort (yes, there are hills in NYC) as this might skew my pacing later on in the effort. Lastly, I wanted to ensure my nutrition was very, very dialed in. The idea would be to be MORE aggressive than ever before in the calories I’m taking in so that I would feel full of energy the entire time.
In the end, I was able to do an out & back of about 45km and finished feeling really great – I don’t think it would be a stretch to say I could have kept on going if tim

e had allowed. Although my moving time was clearly something of a record for the marathon distance, I do wonder if this strategy on a flat course with minimal stopping breaks for hydration would result in a faster overall marathon time. This is going to be an open question for a few years until racing comes back. A few more notes for posterity and future efforts (especially, if races ever do come back): 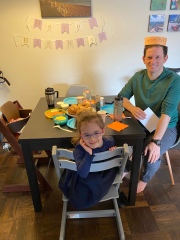 I finally arrived home to a wonderful birthday brunch with my family. Honestly, I have just the best wife in the world who understands what I need to feel energized for the long road to old age. And I felt pretty good having kept up my yearly tradition of two major races – not sure how much longer I can keep this up but as always having some notes around what went right and what went WRONG should help with future efforts.